I remember a dumb diet cartoon that went around when I was a kid.  It was two overweight people talking and one says “I”m on the see-food (spelled seafood) diet…. I SEE FOOD and I eat it!”  Ha!

Well, maybe that isn’t so dumb after all.  After reading a recent article in the Newsletter Nutrition Action, I was really inspired by the work of Dr. Brian Wasnik.I’ve seen him talk at the Experimental Biology conference in 2010 and recall his enthusiasm for understanding people’s eating behaviors.  He gets beyond simply looking at food from a calories in/calories out perspective.

In a nutshell, his philosphy is that mindful eating is really about the food environment: how big is your plate?  How fast are others eating their food around you?  What cues do you use to know that you are full?  Many of us DON’T use internal cues – we instead belong to the ‘clean plate club’ or stop eating when those around us do so.  Have you ever noticed that about yourself?  I certainly have!   I’ve also noticed how food behaviors, like eating really fast, stick around with me even when the need to do so is absent.  For instance, if I have plenty of time for a relaxed lunch, I’m more apt to still eat quickly if I’m eating alone because of the many days of my life when I was rushed (real or percieved) to do so.  The result: I feel like I ‘missed something’ and usually want a sweet taste, even if it’s fruit, to end the meal.

In general, this work is really important if you are trying to change your behaviors.  You could have the strongest desire to improve your diet and great intentions, but if you aren’t attuned to the visual, sensory, olfactory envrionment in which you eat, your best efforts may be no match for the subconscious influences.

I love the notion of eating food on nice dishes, instead of cheap, ugly/plastic/paper dishes.  It speaks to the value of food as being worthy of attention.  I love the idea that food presentation can help curb serving size.  I’m much more likely to stop eating when full when the food is nicely presented because it’ a feast for the eyes as well as the body.

Look around your life and observe times when you over eat or eat things you don’t want to be consuming.  What triggers it?  Maybe the trigger isn’t even immediately felt?  There have been times when I’ve watched some of those cooking shows about cupcakes (why so many cupcake shows??) and suddenly I can’t get cake and cupcakes out of my mind.  I don’t watch those particular shows now b/c they stick with me and it’s hard for me to stop the drive to eat sweets when I’ve been subconsciously primed!!

This approach to food behavior is invaluable for helping us make lasting dietary changes on a familial, community and cultural level.  We cannot simply continue to produce dietary recommendations unless they encompass a behavioral component as well.  If simply telling people how many fruits and vegetables to consume was enough, obesity and diabetes and eating disorders would not be as prevalent as they currently are.  My hope is to advocate for behavioral change as a fundamental component of dietary change in my future professional work.  While one one hand it may feel overwhelming to realize that knowledge about healthy food isn’t enough to combat the pitfalls of a poor diet, it is also exciting to realize that maybe the reasons some of us have struggled are less about facts and more about the non-nutrient elements of eating that come into play.  To be sure, fatty and sugar food will ALWAYS be pleasurable and may in themselves pose a risk of overconsumption, but unless we look at environment as well it remains unknown how much of that drive can be shifted my making changes in the external landscape.

Okay, I’ll hop off of my soapbox now!  I’m simply excited to see this work being published in a mainstream format (via the newsletter and Dr. Wasnik’s books), as it gives further clout to something I’ve seen to be true as well.  Now, to the matter of HOW to change the food and eating environment……..and that is for another post!  But, a few things you can do in the meantime, perhaps: 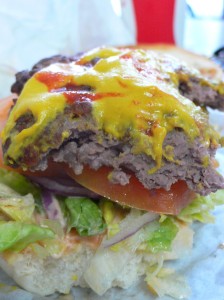 Tonight Matt and I had an adventure.  Tired of the same ol’ burger scene in Davis, we scoured the web for tips on finding a great burger joint in Sacto.  And boy did we!!  As mindful as I am about diet, in my opion, a quality burger is actually health food.  It was a bit of a dive, but the food was great, the meat was fresh, and there was a live band.  Who could pass this up?

But a burger as Health food?  Seriously?  Yep.  If you do it right.  Think about it.  Ground beef/turkey is chock full o’ protein, some healthy fats (grass fed moreso), and burgers  are a venue for fresh raw veggies….and if you play your cards right, you get real potato fries, like steak fries that aren’t as greasy.   Look at the picture again.  You can tell this burger was made from fresh ground steak and note the generous dose of mustard and hot sauce on the top.  Also note the extra veggies… Okay, so it’s not exactly the same I’d eat when I’m on a cleanse, but its better for me than eating something like pasta, which might trigger over eating of empty carbs, and definitely better for me than having dessert.

Here’s how I go from mindless to mindful indulgence when eating burgers:

“Once there was a young warrior. Her teacher told her that she had to do battle with fear. She didn’t want to do that. It seemed too aggressive; it was scary; it seemed unfriendly. But the teacher said she had to do it and gave her the instructions for the battle. The day arrived. The student warrior stood on one side, and fear stood on the other. The warrior was feeling very small, and fear was looking big and wrathful. They both had their weapons. The young warrior roused herself and went toward fear, prostrated three times, and asked, “May I have permission to go into battle with you?”  Fear said, “Thank you for showing me so much respect that you ask my permission.”  Then the young warrior said, “How can I defeat you?” Fear replied, “My weapons are that I talk fast, and I get very close to your face. Then you get completely unnerved, and you do whatever I say. If you don’t do what I tell you, I have no power. You can listen to me, and you can have respect for me. You can even be convinced by me. But if you don’t do what I say, I have no power.” In this way, the student warrior learned how to defeat fear.”

This short parable sums up a lot for me about fear and how I’ve been dragged into battle with it and used food to overcome that battle.  Sometimes this is so subtle, and I  think it stared so very long ago that I can’t even remember the first time I ate to soothe an internal fear.

This also reminds me that I need to share with you what I learned at the food addiction syposium.  I’m going to post several times about what I learned because it touched me at many levels.

First, there is STRONG evidence that certain food substances (ie palatable foods, like sweets and high fat/high sugar foods) are addictive in certain individuals.  More on that later.

Philosophically this whole symposium really got down to the essence of addiction to me, which is fear.  Fear usually means a concern that something is going to be taken away, or taken out of our control.  We learn at a young age sometimes that food will soothe this very base emotion.  I’ve often heard that the opposite of love is fear.  Love is harminious and self-love is usually associated with good boundary setting, self-care, self respect and awareness.  It’s hard to feel a deep/strong self love and give into fear at the same time (in my experience).

I think culturally we too use food to mask our fears.  Commercials tell us to savor the flavor of some product and we’ll be sexy, wealthy, our celebrating with friends.  So we keep buying in (literally) and replacing our intrinsic coping mechanisms with this false promise.  They play to our fear of being alone or unwanted in a subtle way.  We feel food insecurities even when there are none, and we feel culturally entitled to having the same freedomes with food that we have with life – we should be able to have access to what we want, when we want.  But, what does that do to us?  It makes me personally reliant on that external substance (sugar) as my coping tool, as my reassurance that life is okay.   It means the voice of fear is larger than the voice of inner trust.  I can recall a moment of awareness when I moved to San Diego and, having  taken a job that paid 50% less than my previous job, I was obsessed with grocery shopping.  Groceries were my new form of abundance because I needed to feel that I was okay and life was okay even with less income.  It go worse when I started my own business (very shaky ground, in my mind) and my sugar addiction EXPLODED!

During the symposium, what was interesting is that the most successful “treatments” for food compuslions, binge eating or chronic overeating revolve around mindfulness, spirituality and attitude changes.  Not once did we talk about nutritional changes to get people to kick the habit.  Sure, nutrition is really important and cravings can be instigated by chemical imbalances perpetuated by poor nutrition.  I think that is 50% of the story, but not necessarily the most powerful, or the origin of the problem.

But I thought the juciest messages were in the power of our minds, or spirits and our need for community support to get us beyond the fear of letting go.  What would happen if you didn’t say ‘yes’ to that piece of cake, extra handful of chips, or large coffee drink?  I’ve seriously felt physical fear when imagining never having a certain food again (hot chocolate for me – that is my big attachment).  Physical fear, people.  Crazy.  It’s just a substance but I’ve projected onto it a false sense of security that I think gives me extra ‘power’ to deal with life’s demands.  But it doesn’t.  It creates more demands instead of less.  It distracts me but I’m caught up with the distraction because it’s familiar.

I was very excited and reaffirmed by the symposium because there are people in this world other than me who want to understand food behaviors and want to help others and themselves change for the better.  It’s certainly new frontier in the science world and that is exciting.  It’s also a new frontier when for most of us when we, for the very first time, dive into our inner landscape and have to tell that fear, to it’s face that we don’t have to listen to it.  Can you do it?

Would love to hear your ideas about fear and food.  Agree? Disagree?  Somewhere in the middle?  Do tell!!

My husband, Matt and I are off, for a week in Mexico starting tomorrow.

Some interesting observations I have realized about myself while on vacation:

Here are a few tips/tricks I do use to help me enjoy my vacation instead of being hung up on food/body image:

Other off white internet 'edibles'